Get me outta here!

From Stacey Wallace Benefiel, the author of the Zellie Wells trilogy, comes a new       trilogy set in the Society world.

Penny Black hasn’t had it easy. Just about everything you’d expect to happen to a       harassed foster-kid turned   junkie has happened to Penny. Add in the mysterious     power to rewind time, conducting events around her, and it’s a wonder she held up   on the streets for so many years. Now, at seventeen, the New Society has found           her. Finally, Penny is where she belongs. But that doesn’t stop the visions, or the       need to protect the victims   shown to her.

Wyatt Adams is excited and intrigued when his sister Melody assigns him to be           Penny’s Lookout. Being the youngest, and hopelessly ordinary in the family that         created the New Society, has left Wyatt feeling like he has a lot to prove — and             Penny is a big deal. She’s got abilities that surpass any he’s seen   before … and           pretty much every quality he looks for in a girlfriend, but no one needs to know           about that, especially Penny.

*The Penny Black trilogy is a companion to the ZWT and not a continuation of the series. *Due to language and sexuality, FOUND is recommended for older teens.  BONUS MATERIAL: Excerpt of DEAD HEAT by Lisa Nowak.

Stacey Wallace Benefiel is the author of the Zellie Wells trilogy, the Penny Black     trilogy, the Day of Sacrifice Omnibus, the Open Door Love Story series, and             multiple short stories. She sometimes goes by S.W. Benefiel or Reina Stowe, but   knows she’s not foolin’ anybody. Stacey lives in an orange house in Beaverton,       OR with her two young children who have old people names. When she’s not         writing, thinking about writing, or driving the kids somewhere, Stacey is at             CrossFit, lifting heavy things and cursing the inventor of the Burpee.For more info. on Stacey and her books, please check out her website: www.staceywallacebenefiel.com

I gave this book five stars out of five because the authors writing, world and character was so great that I felt like I was part of the story and was also able to see things through the eyes of the main character, Penny.

This story is about a teenage girl called Penny who can rewind time but doesn’t know what she’s able to do as can’t remember anything that she does after she’s dine it.

We see her dealing with this as well as her teenage anxt on her own to begin with but the a group called the Society find her and take her to their facility where they train and care for other teenagers with special abilities.

When she arrives at the Society facility and settles in she eventually starts to feel like she’s part of a family. Although this eventually comes to an end and she finds her self on the move again after one of her male friends and best friends boyfriend tells her that he is developing feelings for her. This develops further when he kisses her and is seen by her boyfriend and so as the saying goes the shit hits the fan.

I loved this book so much that I can’t wait for the next one to see how the story develops and I will also re read it again as well as recommend it to and buy it for others. I also plan to buy the physical book for my book shelf as well because I love the cover so much.

Twelve-year-old Zach is too old to play with toys. Or at least, that’s  what his father thinks.

But even though he stops hanging out with Poppy and Alice, stops  playing with his action figures, it’s no good. There’s one toy that still  wants to play with him. A doll that’s made from the bones of a dead  girl.

The only way to end the game is to lay the doll to rest for ever. It’s time  for a journey to Spring Grove cemetery. It’s time to grow up.

Holly Black spent her early years in a decaying Victorian mansion where her mother fed   her a steady diet of ghost stories and faerie tales. An avid collector of rare folklore             volumes and spooky dolls, she lives in Amherst, Massachusetts, with her husband,             Theo. For more information, visit www.blackholly.com.

I want to start this review by thanking Holly Black the Author and NetGalley for allowing me to read this book. I gave the book 5 stars out of five because I loved the premiss of the story and felt that I connected with the three main characters.

Holly’s writing was fantastic and the development of the characters made the story really immersive. I found the fact that the doll was possessed by the spirit of a dead girl from the 1800’s who just wanted to be put to rest by being buried in her home town.

The three main characters, children 2 girls and the a boy, were really believable and I connected with all of them in different way but particularly with one of the girls. I loved the fact that the kids although they were in middle school were still playing with dolls and action figures which they were using to make up quest based games. It was great that this was actually transferred in to their real life when they travelled to the home town of the doll girl to lay her to rest.

This is a book that I will read again as well as recommend it to others and buy it as a gift for people. 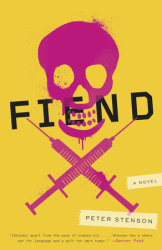 When Chase sees the little girl in umbrella socks savaging the Rottweiler, he’s not too                 concerned. As someone who’s been smoking meth every day for as long as he can remember,  he’s no stranger to such horrifying, drug-fueled hallucinations. But as he and his fellow      junkies discover, the little girl is no illusion. The end of the world really has arrived. And  with  Chase’s life already destroyed beyond all hope of redemption, armageddon might              actually be an opportunity – a last chance to hit restart and become the person he once  dreamed of being. Soon Chase is fighting to reconnect with his lost love and dreaming of  becoming her hero among the ruins. But is  salvation just another pipe dream?

Propelled by a blistering first-person voice and featuring a powerfully compelling anti-hero,  Fiend is at once a  brilliant portrait of addiction, a pitch-black comedy, and the darkest, most  twisted love story you’ve ever read – not to mention one hell of a zombie novel.Book Information

Peter Stenson is an MFA candidate at Colorado State University. His stories and essays have been published in The Sun, Confrontation, Post Road, Fugue, Passages North, The Pinch, Blue Mesa Review, Upstreet, and elsewhere.

I would like to start this review by thanking Blogging for Books for allowing me to read this book and I am so glad that I was able to because although it took me a while to read I really enjoyed it. Which is why I am giving 4 stars out of 5.

It took me a while to read this book because although the authors writing style immersed you in the story because of the fact that the story was about a group of drug addicts stuck in the middle of the zombie appocalypse, who were tripping most of the time so there were times when  you didn’t know when the things were actually happening or whether it was part of their hallucination. I didn’t think about it while I was reading but there was a link the mindlessness of the zombies and the drug addicts and the author showed this in a very clever way because it didn’t really occur to me until I had finished reading the book and thought about it for a while.

The author developed the characters and the world that they were in so well that you felt that you were actually part of the story as well as making me aware of how dark and scary it would be to be the non living dead alive when the zombie appocalypse happened.

I enjoyed this book and will be re reading it again at some point as well as possibly buy a paperback copy so I can have it on my shelf. I will also recomend it to others/buy it as gifts for other people.

All craft items shown have been created by Catherine Hunt for CKV Craft & Design – using Stampin’ Up! products (which are copyright Stampin’ Up!, 1990 – 2015). Karen is solely responsibile for the craft items and projects themselves – and these are not endorsed by Stampin’ Up! in any way.

Website content (including text, photographs and projects) is copyright Catherine Hunt. If you wish to reproduce anything shown, then please seek Catherine’s approval first, at: catherinehunt.me.uk77@gmail.com